Livingston County celebrates 200 years in 2021! Check back here for 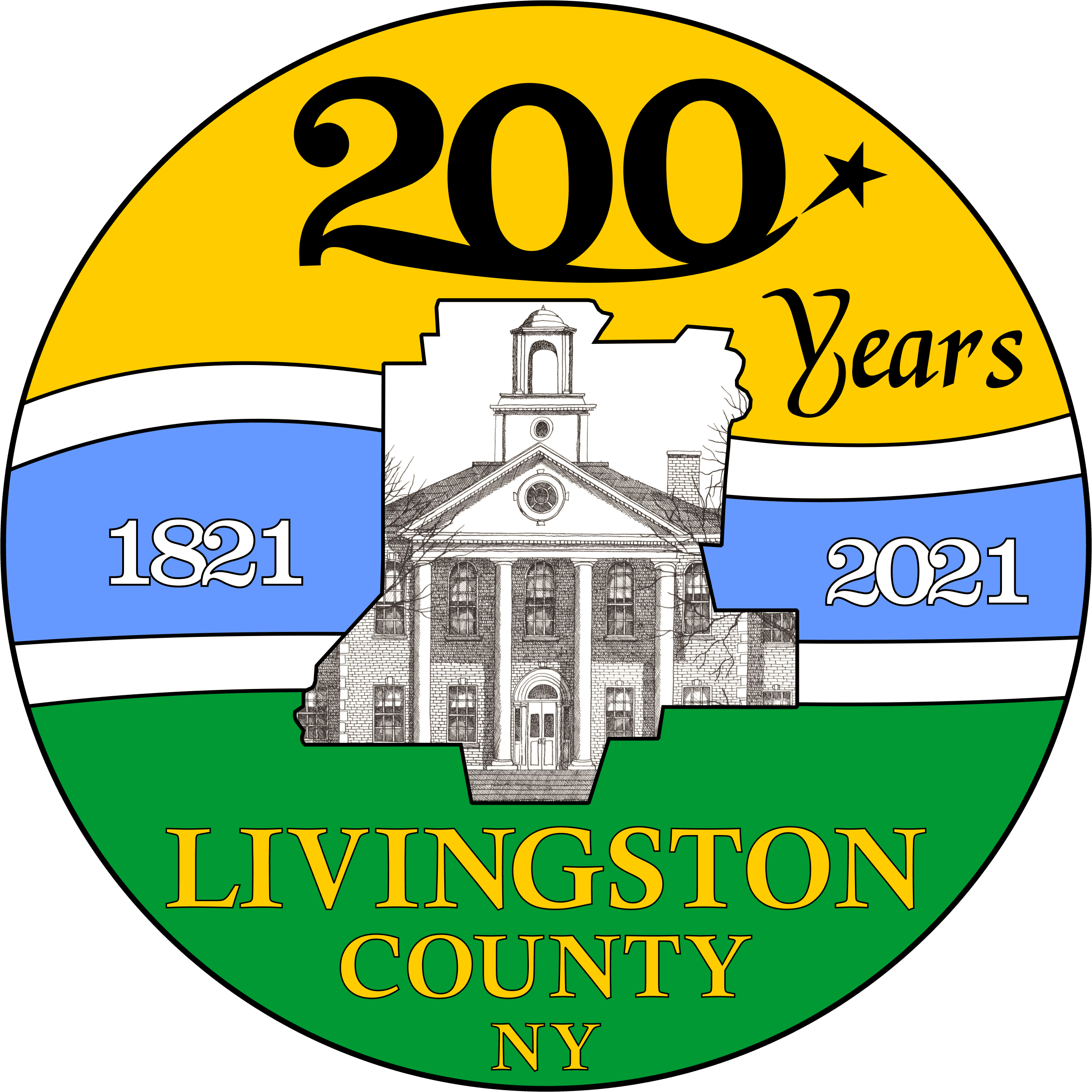 county-wide events as we lead up to this milestone in our community’s history.

In the Works Now:

Local History Out Loud - Part Two: The History of Livingston County from the Civil War to the Industrial Revolution

To help count down to 2021, the County Historian's Bicentennial Moments aim to share interesting stories about people, places, and events that are a significant part of our shared history. Here are the latest installments:

On Friday, July 9, 1858, at exactly 21 minutes past 3:00 P.M. the first execution in Livingston County took place on the side lawn between the Courthouse and the jail in Geneseo.

Isaac I. Wood of Dansville was convicted of administering arsenic to his brother David J. Wood in 1855. Isaac’s motive was to gain access to his brother’s bank account. David’s wife, Rhoda, and their two children were out of town when David died suddenly with Isaac at his side. Upon learning of her 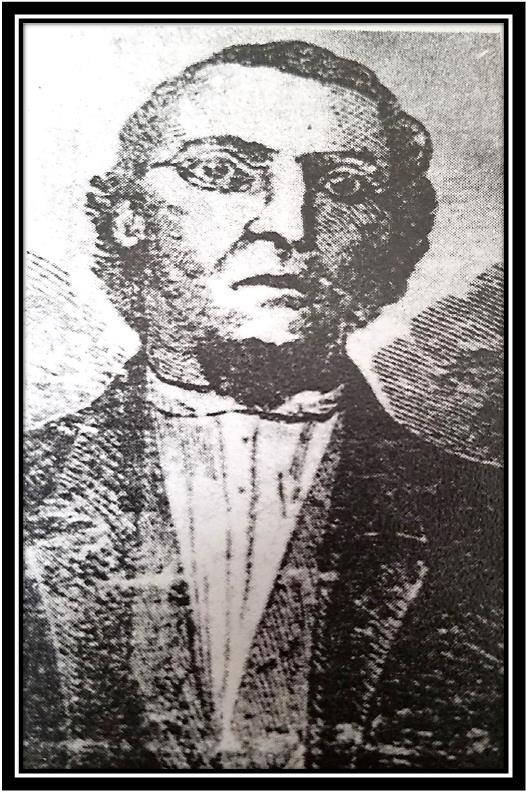 husband’s death, Rhoda returned and soon she and the two children became sick. Isaac had poisoned them as well. The children recovered but their mother died. Locals suspected foul play, but didn’t have the evidence to indict Issac.

After leaving the area, Isaac’s wife died in a similar fashion as his brother and sister-in-law. Finally, after the bodies of his victims were exhumed and a chemical analysis was done, the serial killer was arrested, tried, convicted and hung before an audience of curiosity-seekers who came to witness the gruesome historical event.

Only two other hangings occurred in Livingston County: Henry Wilson, a notorious hardened criminal, went to the gallows in 1865 and William Pierson, who poisoned his victim, faced the same fate in 1880. The salacious details of all three hangings made national news and left an indelible mark on the county’s past.

Image of Isaac I. Wood

Many Livingston County residents patented inventions in the nineteent 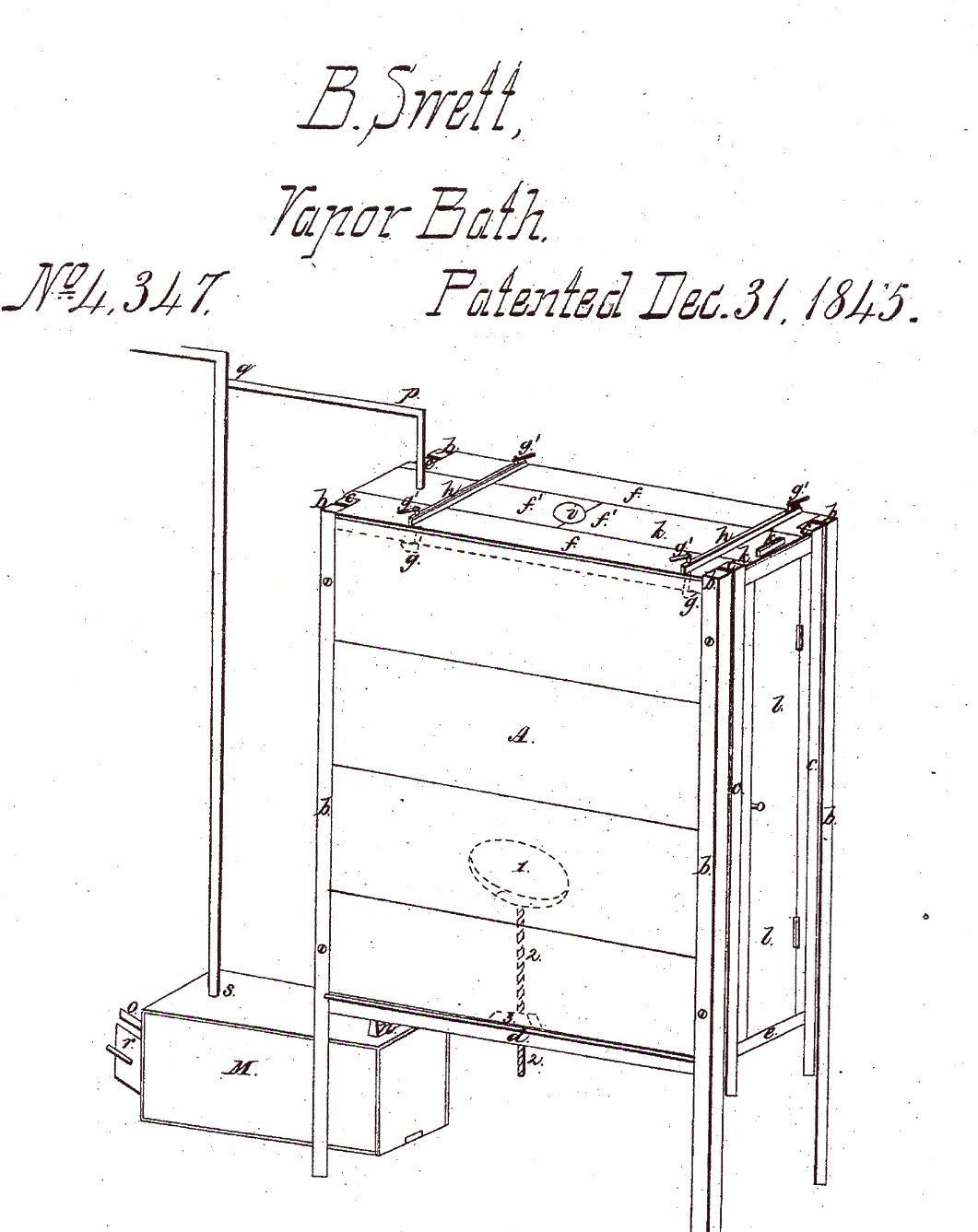 h century.  Among them was Dr. Benjamin Swett of Mt. Morris who, in 1845, invented what he called “a new and useful mode of delivering Medicated Fume-Baths.” In essence, it was a large wooden box in which a person would sit with a stove attached. A connecting pipe delivered hot “medicated vapors” without the presence of steam. 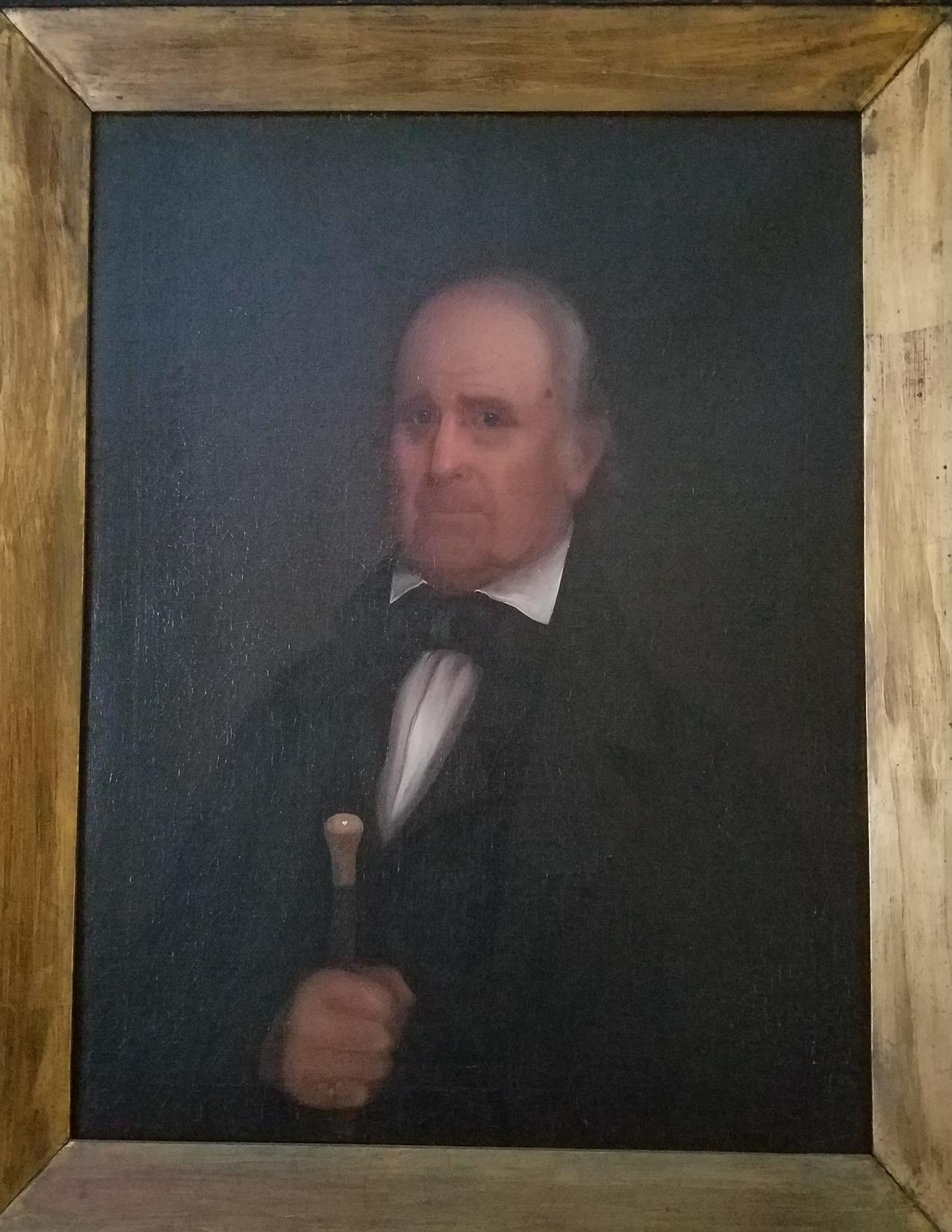 Others had patented similar baths, but Dr. Swett claimed his design to be the most superior in the world as a remedy for numerous afflictions, from rheumatism to “female complaints.” Dr. Swett sold the bath at several locations in Rochester in the early 1850s, but sales were short-lived as he passed away in 1853. It is unclear whether the machine was considered safe or a fire hazard.

Water therapy advanced in popularity in the U. S. and around the world throughout the 1800s, thanks in large part to the contributions of Dr. James C. Jackson and Dr. Harriet Austin at the Jackson Sanitarium in Dansville. 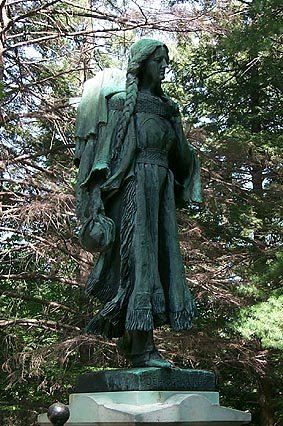 p on a farm near Gettysburg, PA. In 1755, a raiding party of French soldiers and Shawnee warriors captured her family; her two brothers escaped, but the rest of her family was killed and scalped. Mary was turned over to a party of Senecas who gave her the name “Deh-he-wa-mis” meaning “Two Falling Voices.” She eventually came to live in the Genesee Valley and settled at Little Beard’s Town in Cuylerville.

As a result of the Treaty of Big Tree in 1797, she was granted nearly 18,000 acres of excellent-quality land called the Gardeau Flats where Letchworth State Park is today. She lived there until 1831 when she sold the land and moved to the Buffalo Creek Reservation where she died two years later. In 1874, thanks to William Pryor Letchworth, her remains were returned to her former home and re-interred on the bluff above the Middle Falls in Letchworth Park, where a monument honors the life of the Valley’s most famous resident. Mary Jemison was interviewed by James Seaver in 1823 for a narrative of her life in captivity and her story continues to provide invaluable insight into Seneca life in the mid-18th through the early 19th century.

In 1779, General George Washington sent General John Sullivan into the heart of Seneca territory with orders to destroy all settlements. Sullivan combined forces with General James Clinton's army for a total of about 5000 men to lead the largest offensive movement of the Revolution into Central and Western New York with the objective of stopping the deadly British-Tory-Indian raids on frontier settlements across the state. When the army reached present day Livingston County they encountered the only organized resistance of the campaign, outside of the Newtown Battlefield near Elmira. 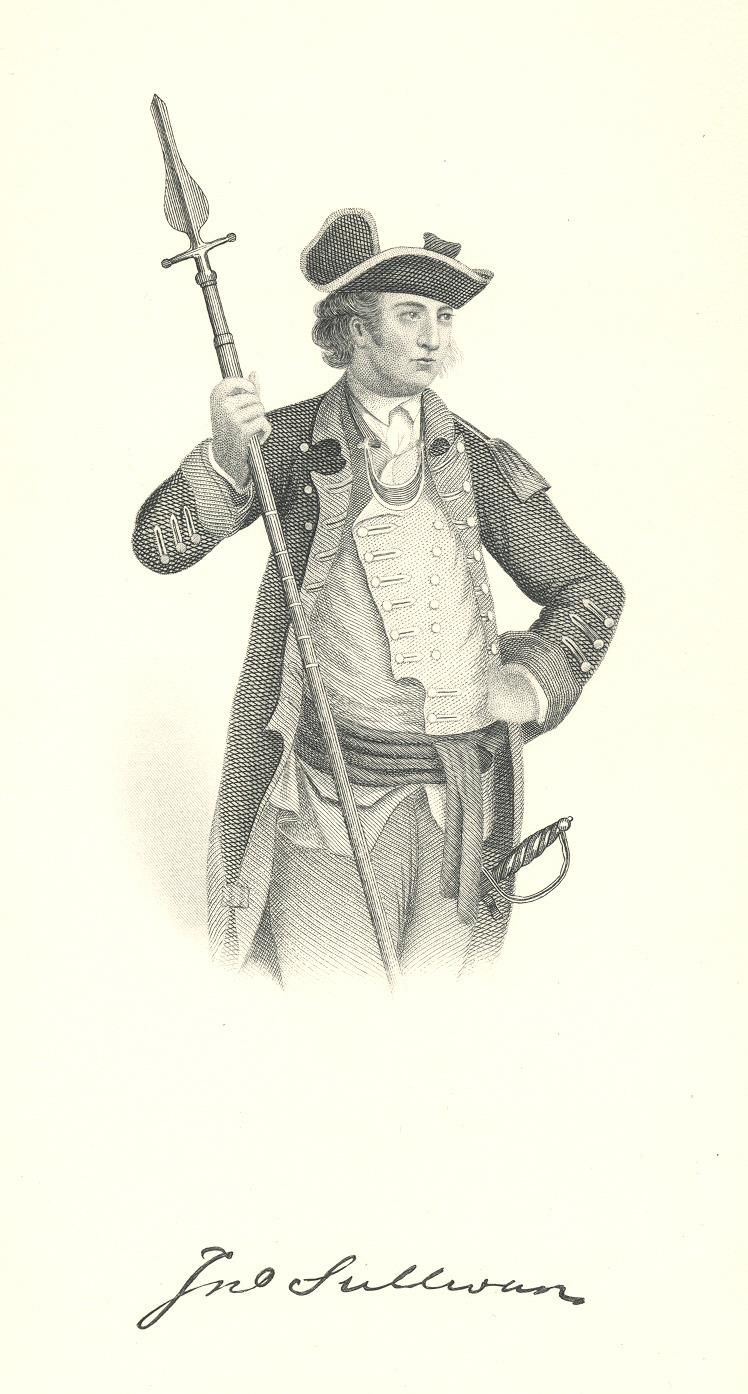 On Sunday, September 12, 1779 as the army set up camp in Conesus and Sullivan sent a scouting party out, most of whom never returned. The scouting party was ambushed on what is now Groveland Hill and more than 16 soldiers including an Oneida guide were slain. Lt. Boyd and Sgt. Michael Parker were captured and taken to Cuylerville, site of the largest Indian settlement in western New York. When the army reached Cuylerville on September 14th, the tortured and mutilated bodies of  Boyd and Parker were discovered and buried with military honors. The army then destroyed the recently abandoned village on 128 homes and burned hundreds of acres of crops and gardens, deterring the Seneca from returning that season and forcing the British to care for them at Fort Niagara.

This was the western limit and the ultimate destination of the Sullivan Campaign. Having fulfilling General Washington's orders, the army left Livingston County on September 16, 1779 the same route they advanced. The bodies of the soldiers killed on Groveland Hill were discovered when the army retreated and also buried with honors.

A Society of Christian Believers, commonly known as Shakers, moved from Sodas Bay in Wayne County to the hamlet of Sonyea in Groveland, Livingston County in 1837. This was the last long-lived Shaker community and the only colony in western New York. The Shakers practiced celibacy, agrarian communal living, and self-sufficiency. The fertile flat lands and the Genesee Valley Canal greatly benefited the Shakers' cottage industries that included brooms, furniture, and seeds. But by 1892, membership was greatly diminished and the last few women merged with the Shaker community in eastern New York at Watervliet. The land in Groveland was sold to the State of New York for the Craig Colony for Epileptics which opened in 1896. Craig closed in the 1980s and Groveland Correctional Facility, a New York State medium-security prison, took over the property and still occupies the former Shaker land to the present day. 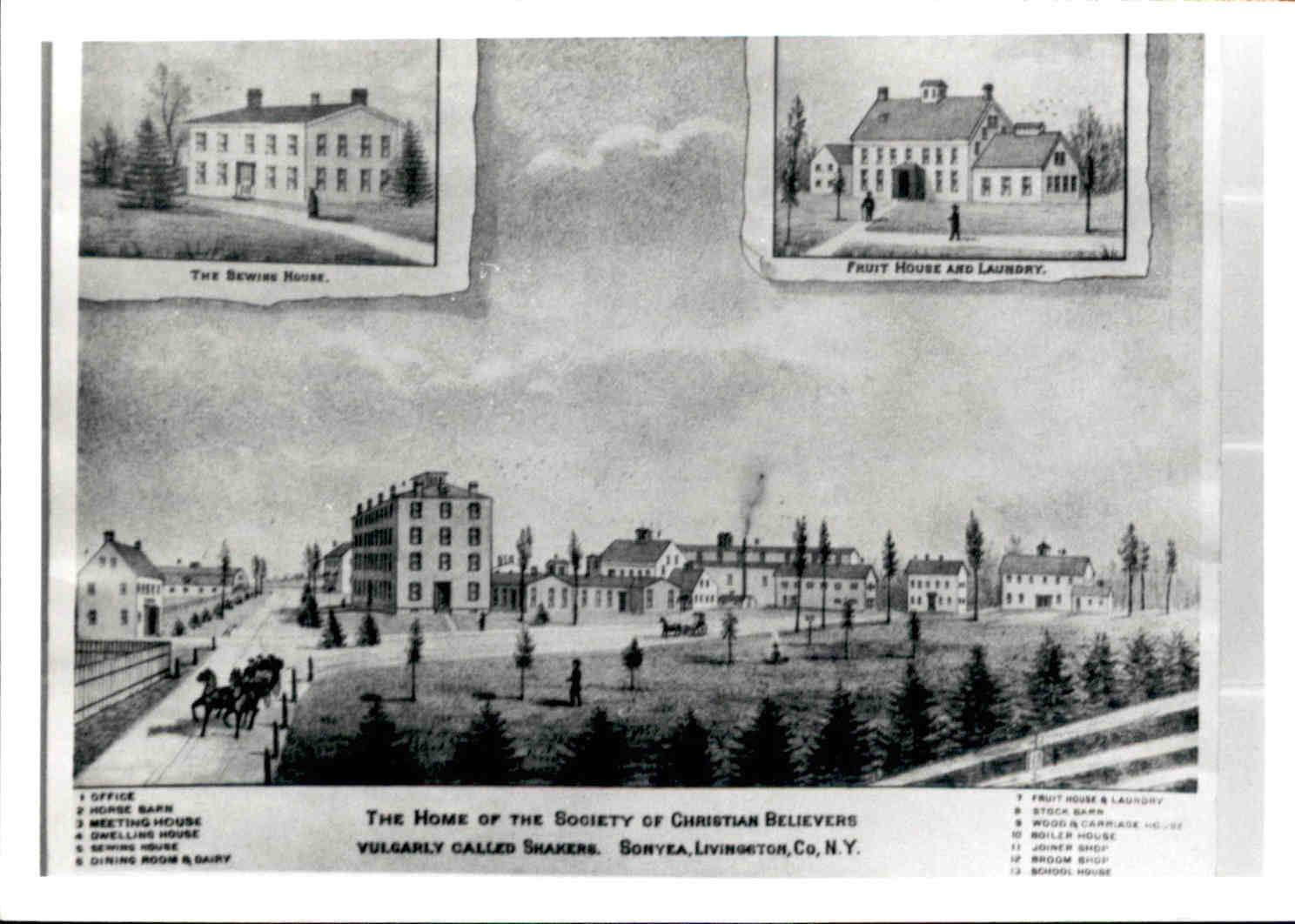 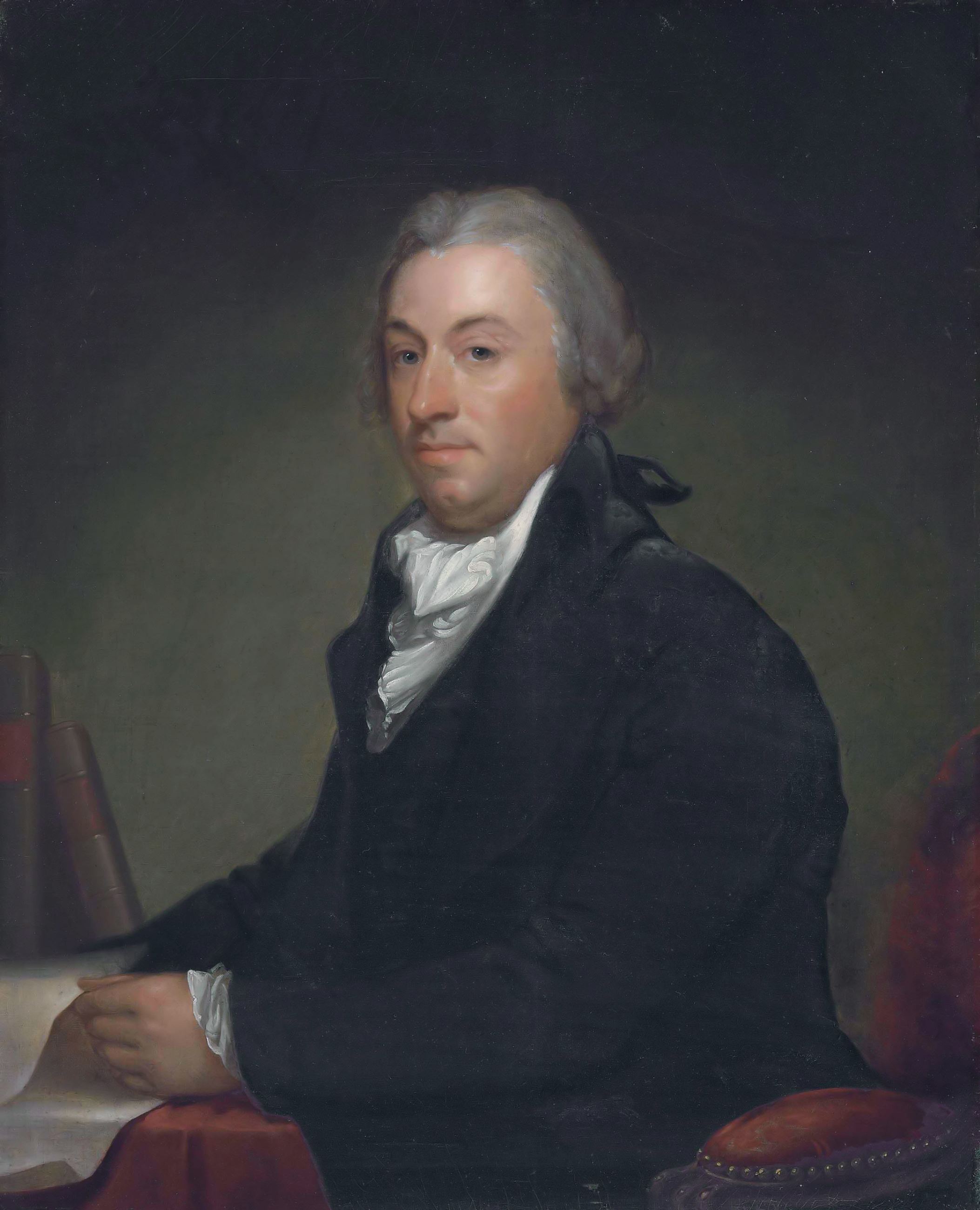 Livingston County was named in honor of Chancellor Robert R. Livingston (1746-1813), a man who never  resided Livingston County, but who was among the Founding Fathers of the United States of America. Livingston was the eldest son of Judge Robert Livingston (1718–1775) and Margaret (née Beekman) Livingston, uniting two wealthy Hudson River Valley families. Among his many contributions, Livingston was a member of the Second Continental Congress, co-author of the Declaration of Independence, and in 1789 he administered the oath of office to President George Washington.

As a member of the Committee of Five that drafted the Declaration of Independence, Livingston worked alongside Thomas Jefferson, Benjamin Franklin, John Adams, and Roger Sherman. A regional and national luminary, Livingston served as Chancellor of the Supreme Court of New York (1777 to 1801). As the United States Minister to France from 1801 to 1804, he was one of the key figures in negotiating the Louisiana Purchase with Napoleon Bonaparte, a sale that marked a turning point in the relationship between the two nations. During his time as U.S. Minister to France, Livingston met Robert Fulton, with whom he developed the first viable steamboat, the North River Steamboat, whose home port was at the Livingston family home of Clermont Manor in Clermont, New York.

In addition to the naming of Livingston County in his honor, Robert R. Livingston's legacy lives on in numerous ways including a statue commissioned by the State of New York and placed in the National Statuary Hall at the U.S. Capitol building, his inclusion on the Jefferson Memorial pediment sculpture which honors the Committee of Five, and in the famous painting by John Trumbull of the signing of the Declaration of Independence.

Chancellor Livingston died on February 25, 1813, and is buried in Tivoli, New York. Livingston County was formed almost exactly eight years after his death, a fitting tribute to a man who played a central role in American history. 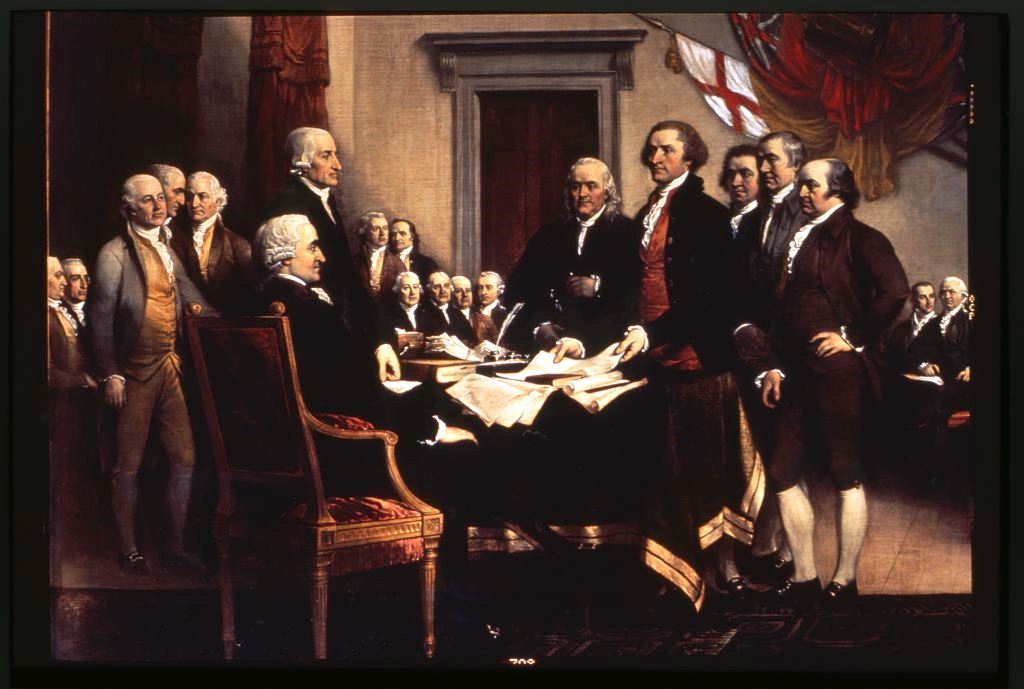 Declaration of Independence. By John Trumbull, 1818. The Committee of Five stands at the center. Thomas Jefferson is depicted presenting the draft Declaration to the Second Continental Congress with Benjamin Franklin at his side, and just behind them are, from left to right, John Adams, Roger Sherman, and Robert Livingston.

John Trumbull was one of the most famous individuals of his era. His portraits of presidents such as George Washington and paintings of historical events that include the signing of the Declaration of Independence, the Battle of Bunker Hill, and the surrender of Cornwallis at Yorktown, are among the iconic images in American history.

Trumbull was closely associated with the Wadsworths and others who invested heavily in lands in the early 1800s in what is now Livingston County. He took title to the Mount Morris Tract of over 1200 acres and arranged to have hundred of fruit trees planted along the Genesee flats. Although Trumbull never took up residence here, his keen interest in the success of his orchards and being a part of the growth and development of the Genesee Valley region was evident in his vast correspondence.

Declaration of Independence. By John Trumbull, 1818. 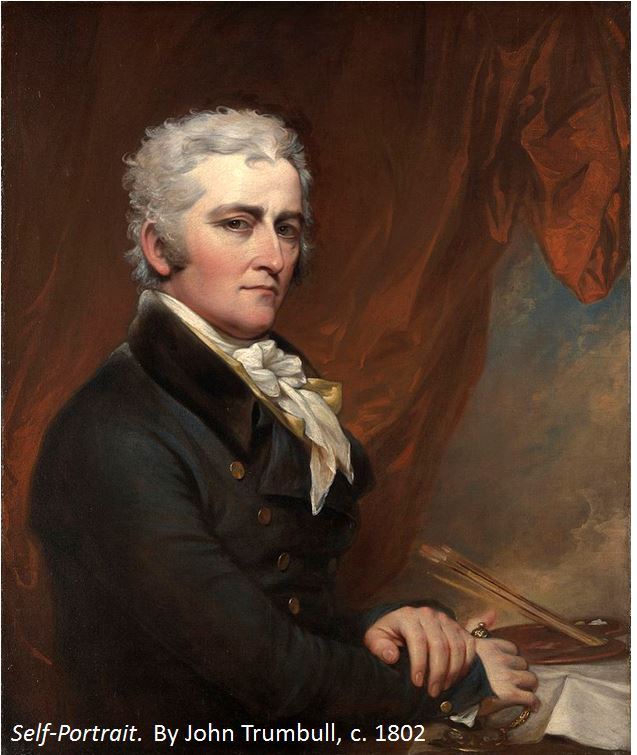 Next Previous
It's never too soon to pat yourself on the back! The County Historian has already accomplished the following as the Bicentennial approaches:
Agendas & Minutes
Bids & RFPs
Employment
COVID-19
Ride LivINgston
Online Services
Find it in Livingston
Facebook
Twitter
Instagram
YouTube
[]