The Livingston County Veterans Monument was an unprecedented collaboration between Livingston County and Genesee Valley BOCES. This major undertaking was approved by the Board of supervisors and started on February 14th 2019 with the aim to make 100 metal poppies ending with 250.
The project was delayed by weather and dedicated in 2021.
Click on the picture below to see the documentary provided by Flying Baby Pictures about how this monument came to be. 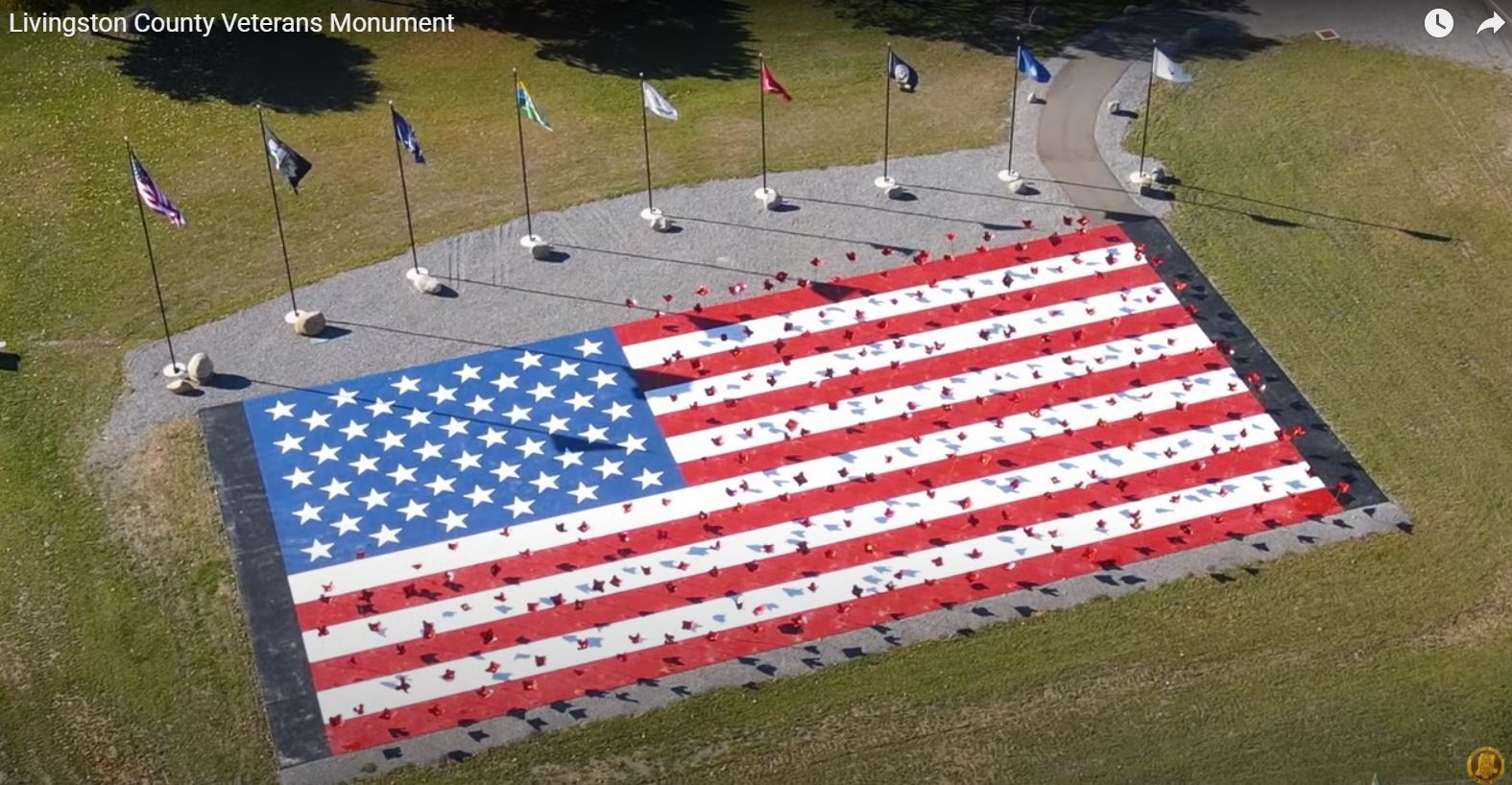 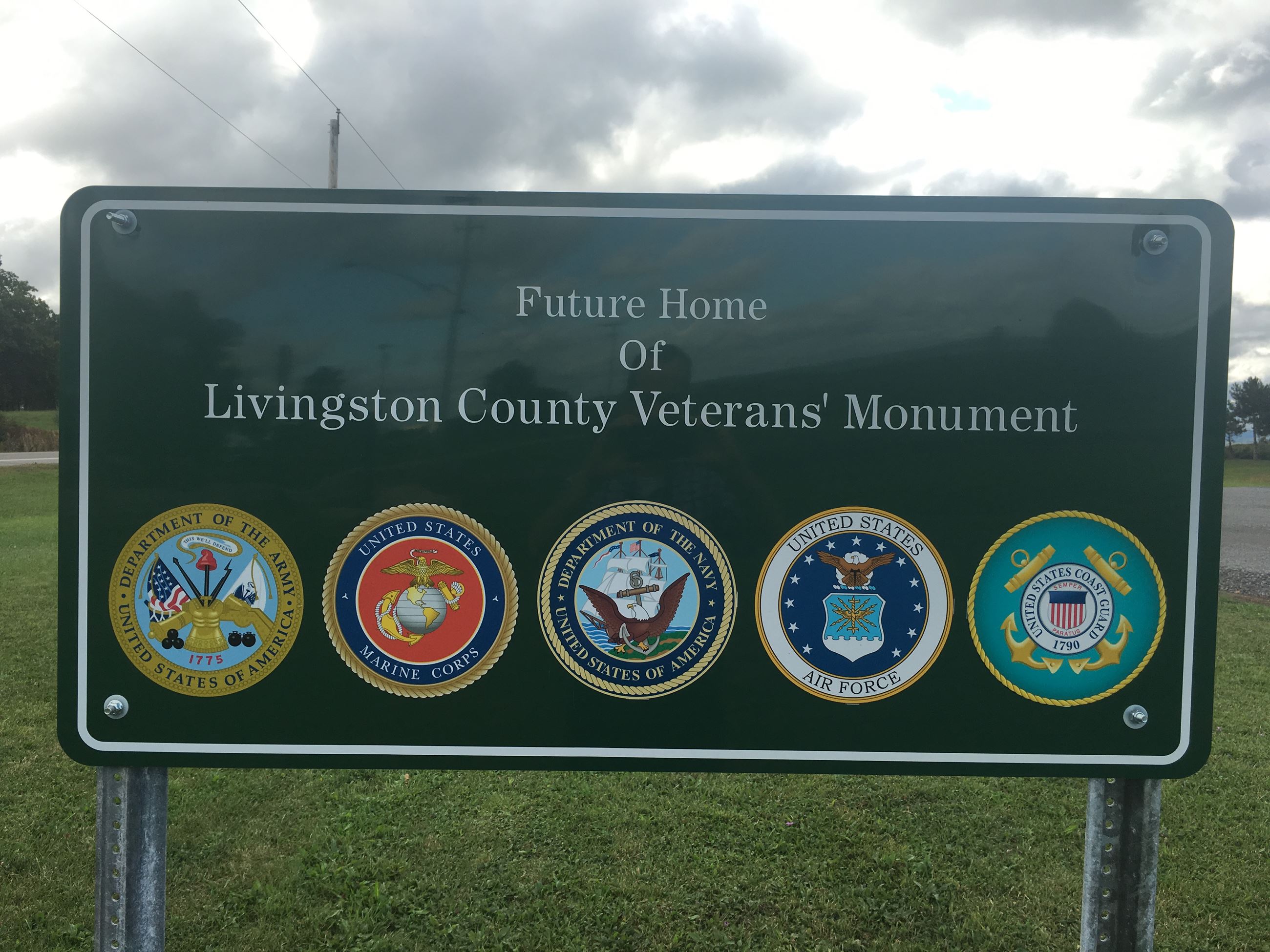 When Olie Olson the Metal Trades Instructor for the Genesee Valley Educational Partnership was asked about a concept for a small poppy related monument for the veterans of Livingston County he said, "on one condition". He said that he wanted to teach veterans to weld their own poppy to become more engaged and part of the monument itself. With the assistance of Highway Superintendent Don Higgins, Jason Skinner the Director of the Veterans Service Agency proposed to the Livingston County Board of Supervisors the Idea of a Monument to honor our veterans that call Livingston County Home.

Olie's concept turned out to be much larger in scale than Jason had thought. Skinner asked both Olie and Don about the best location for this monument. We chose the most highly trafficked parcel that the county owned. The Livingston County Highway Departments location on Gypsy Lane in Groveland is by no means hiding away in some far corner for people to have to search for it. Don pledged his departments efforts to build the monument, custom make the needed nine flag poles, and erect them.

Once the Board had given the go ahead Jason started showing the prototypes to the veteran community at the American Legion County Meetings. Passing out flyers and discussing its purpose with veterans starting in November 2019.

Classes for veterans and Olie's vision.

On February 14th 2019 classes started with Olie and his assistant Rory Benkleman. Our project went forward with so many unknowns. Would anyone want to weld their own Poppy? Initially classes were slow when we started on

Joe DiTucci was making a poppy and approached Olie with an Idea. Why not attach a label to each poppy that looks like a dog tag. Olie's students started making custom cutout stainless steel dog tags. Each veteran now had a story to tell about each poppy they decided to dedicate to someone. Even though the idea was to have 100 poppies that were as unique as the veteran making them this added layer made it all the more special.

As word spread many more came to learn how to weld for the first time. Some vets that have been welding for some time assisted other get past the initial anxiety of trying something new. There were veterans of an advanced age and those that served recently all getting to know each other and connecting from every corner of our county. The oldest veteran to work on this project is 98 and the youngest participant is 4.

The Genesee Valley BOCES Mt. Morris location became filled with veterans and volunteers. Knowing that summer break meant stopping June came too early for all involved. From Valentine’s Day 2019 to late June in less than four months in about 16 classes 250 poppies were made. We had to make a bigger monument.

The last week of June we held a picnic with help from the Caledonia VFW and the Legion Auxiliary. While hotdogs were grilled Assemblywoman Byrnes took time to recognize everyone. With anticipation of the next stage of installation we waited for the weather to break in our favor.

The site work Don Higgins and the Highway Department.

The rain this year set every project back for many in the field of construction. Our project was no exception. Rain seemed to start anytime they needed to get started on their phase of construction. The talented employees of the Highway Department dedicated themselves to support this project in every way possible. They decided to custom fabricate each of the nine flagpoles need to complete the monument. The first break in the weather allowed them to prep and pave a new parking area for the monument. Site prep was highly involved with drainage to be installed underneath the now visible flat area that is the monument. Truck load after truck load of fill from various excavation projects throughout the county were used to fill in areas to grade the site properly. There is quite possibly a piece of every town under our monument. The rain kept pushing back the pouring of the concrete that was to make up the base of the monument. Luckily four concrete companies pledged to work together to assist in the creation of our cement pad. Now that it has been poured the next phase is installation.